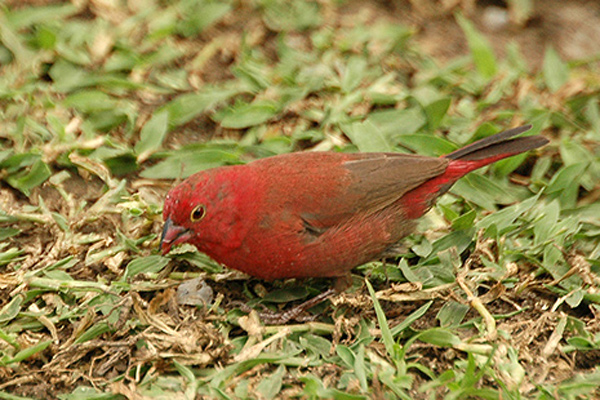 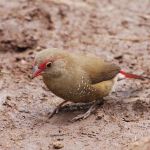 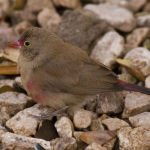 The Red-billed Firefinch or Senegal Firefinch (Lagonosticta senegala) is a small passerine bird. This estrildid finch is a resident breeding bird in most of sub-Saharan Africa with an estimated global extent of occurrence of 10,000,000 km². This species was introduced to Egypt, however, the introduced population has become extinct.

The Red-billed Firefinch is 10 cm in length. The adult male has entirely scarlet plumage apart from brown wings. The bill is pink, and there is a yellow eye-ring. Females have uniformly brown upperparts and buff underparts. There is a small red patch in front of both eyes, and the bill is pink.

The Red-billed Firefinch is a small gregarious bird which feeds mainly on grain and other seeds. It frequents open grassland and cultivation. The nest is a large domed grass structure with a side entrance, built low in a bush, wall or thatch into which 3-6 white eggs are laid.

Grass seeds, small seeds of other wild vegetation and millet from agricultural crop. The birds also eat insects. Especially when raising their young they take increased amounts of insects, mostly termites and little spiders which they find in abundance.