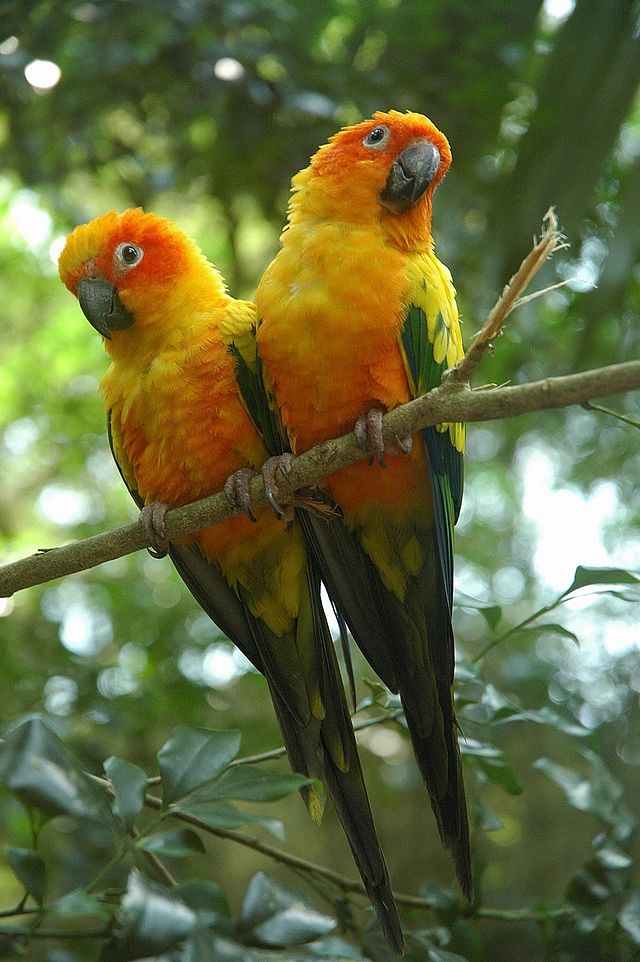 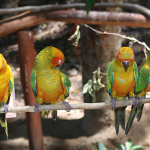 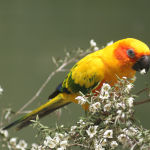 The sun conure (Aratinga solstitialis) is a medium-sized brightly colored parrot native to northeastern South America. The adult male and female are similar in appearance, with predominantly golden-yellow plumage and orange-flushed underparts and face. It is commonly kept in aviculture.

Adults have a rich yellow crown, nape, mantle, lesser wing-coverts, tips of the greater wing-coverts, chest, and underwing-coverts. The face and belly are orange with red around the ears. The base of the greater wing-coverts, tertials, and base of the primaries are green, while the secondaries, tips of the primaries, and most of the primary coverts are dark blue. The tail is olive-green with a blue tip. From below, all the flight feathers are dark greyish. The bill is black. The legs and the bare eye-ring are grey, but the latter often fades to white in captivity (so using amount of grey or white in the eye-ring for determining “purity” of an individual can be misleading).

Its exact ecological requirements remain relatively poorly known. It is widely reported as occurring in savanna and coastal forests, but recent sightings suggest it mainly occurs at the edge of humid forest growing in foothills in the Guiana Shield, and crosses more open habitats only when traveling between patches of forest.

Like other members of the genus Aratinga, the sun conure is social and typically occurs in groups of up to 30 individuals. It has been reported as nesting in palm cavities. It mainly feeds on fruits, flowers, berries, nuts, and the like. Otherwise, relatively little is known about its behavior in the wild, in part due to confusion over what information refers to the sun conure and what refers to the sulphur-breasted parakeet. Regardless, the behavior of the two is unlikely to differ to any great extent.