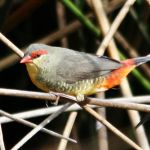 The Orange-breasted Waxbill or Zebra Waxbill (Amandava subflava) is a small (approximately 9 cm long) sparrow-like bird with a reddish iris, orange breast, red bill and dark olive-green plumage. The male has a red rump, dark bars on the whitish flank and a scarlet eyebrow stripe. The female is duller and smaller than male; it lacks the male’s red eyebrow.

The Orange-breasted Waxbill is found in grassland and savannas south of the Sahara in Africa. It has an estimated global extent of occurrence of 10,000,000 km². This species is also introduced to other countries, e.g., Kuwait. Its diet consists mainly of seeds, insects and shoots. The female usually lays between four and six eggs in oval-shaped nest made from grass. These nests are often the old nests of Red-collared Widowbirds.

Widespread and common throughout its large range, the Orange-breasted Waxbill is evaluated as Least Concern on the IUCN Red List of Threatened Species. It is listed on Appendix III of CITES in Ghana.

Goldbreasts live together in small groups in the off-season. They chiefly feed on the ground, eating grass seeds, small invertebrates, and growing grass tips; they may spend a fair amount of the time on the ground even when not feeding. Goldbreasts tend to perch fairly near the ground on reeds, low bushes, and grass heads. In the wild, Goldbreasts roost in reedbeds.